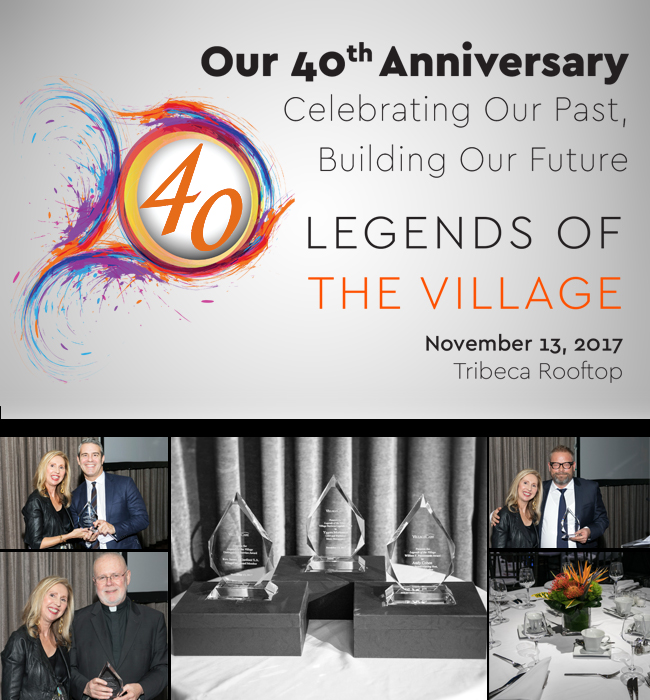 VillageCare held its 19th annual Legends of the Village on Monday, November 13th.  Over 400 supporters gathered together for an evening of dinner and dancing at the Tribeca Rooftop, the same venue for this year’s event.

Receiving the William F. Passannante Award, was Andy Cohen, Emmy Award-winning host, producer, and author best known as the host and executive producer of “Watch What Happens Live with Andy Cohen,” Bravo’s Late Night, interactive talk show.  Cohen also launched “Radio Andy,” a personally curated channel on SiriusXM focused on pop culture, celebrities, lifestyle, relationships and the dish on all topics deep and shallow.  He also launched his own book imprint, Andy Cohen Books, and in November 2016, became a New York Times best-selling author for the fourth time in his career.  Cohen received an Emmy award when season six of “Top Chef” won Outstanding Reality Competition Program at the 2010 primetime Emmy Awards  and  has been nominated for 17 additional  Emmy Awards.

VillageCare also be honored Reverend James Gardiner, S.A.with the Distinguished Service Award.  Rev. Gardiner is a member of the VillageCare Board of Directors, and chairman of the organization’s Client Services Committee.  His tireless contributions towards the organization’s mission, with a special focus on the HIV/AIDS epidemic beginning in the late ‘80s early ‘90s, have enabled VillageCare to effectively serve and reach out to some of the most vulnerable individuals living in New York City.

Rev. Gardiner is a Franciscan Friar of the Atonement currently serving as director of special projects at the Franciscan Monastery of the Holy Land in Washington, DC. He formerly served as director of the Graymoor Spiritual Life Center in Garrison, NY, and was on staff at St. Joseph's Church in Greenwich Village. He currently serves on the boards of Franciscan Action Network, Franciscan Mission Service and the Catholic Association of Ecumenical and Interreligious Officers.

The Village Business Legends Award was presented to Yggers Mortensen, CEO and Publisher of Metro US newspapers in New York City, Boston and Philadelphia.  Mr. Mortensen is a hands-on leader in media, having worked in both developed and emerging markets around the globe.  Metro is a widely-distributed, free daily newspaper designed for an easy 20-minute read.  It is published Monday through Friday and is read mainly during morning commutes.

“Tonight, we are honoring some really special individuals,” said Emma Devito, president and chief executive officer at VillageCare. "We thank our supporters who help VillageCare serve the people who come to us, many of them at their time of greatest need."